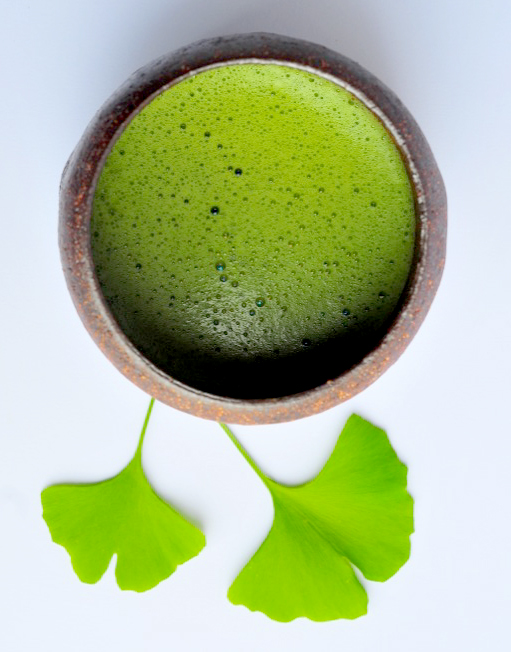 Unlike common teas, where the most nutritious tea leaves are thrown away, matcha green tea is blended with water and consumed. The tea leaves are basically drunk together with the drink, thus consuming 10 to 15 times more nutrients contained in common green teas. Today, we do not have to study chanoyu (Japanese tea ceremony) to be able to enjoy the deliciousness and versatility of powdered tea. Its use is almost unlimited. From the classic green drink prepared with of a bamboo whip through cocktails prepared in a blender to baking and cooking ingredients.

Matcha tea are leaves of the finest Japanese green tea ground to powder. The leaves are first dried and then ground in slowly turning stone mills. Thanks to this extremely gentle processing, matcha keeps all its active ingredients typical for green tea such as vitamins, antioxidants, minerals and fibre. Its taste and smell is clear and fresh.
Unlike common teas, where the most nutritious tea leaves are thrown away, matcha green tea is blended with water and consumed. The tea leaves are basically drunk together with the drink, thus consuming 10 to 15 times more nutrients contained in common green teas.

According to 3rd-century Chinese literature, green tea was originally used as a potion that cured oedema, fever and other symptoms. It is assumed that tea seeds were brought from China by a Japanese envoy during the rule of the Tung dynasty and it went on to be used by the nobility and Buddhist monks as a healing tonic.
In 1191, the Japanese Zen Buddhist monk Eisai brought a new way of drinking tea from China. He poured ground tea into hot water and stirred it − like matcha nowadays − and drank it as a drink, rather than medicine.
Matcha tea ceremony became the ritual of Zen monks, Japanese nobility and the Samurai. There are very precise instructions concerning the tea ceremony procedure, there are even tea schools that specialise in the right preparation of the matcha tea.

The present-day
Today, we do not have to study chanoyu (Japanese tea ceremony) to be able to enjoy the deliciousness and versatility of powder tea. Its use is almost unlimited. From the classic green drink prepared with of a bamboo whip through cocktails prepared in a blender to baking and cooking ingredients. Among the modern delicacies are matcha ice cream and such sweet desserts as matcha chocolates, candy and cookies.

About 20 days before the harvest, the tea plantations are shaded with nets, which eliminate up to 90% of natural light. Such artificially created semi-shade resembles the conditions in which wild tea grows. The tea shrubs compensate for the loss of light by increasing the amount of chlorophyll in their leaves. The best-handpicked tea leaves are then steamed and dried and their stems and veins are cut off. The resulting product is called Tencha.
The leaves are then ground with granite quernstones, each of which gives around 40 kilos of matcha per hour.
Each step of the production process is carefully monitored and documented. Internal laboratory checks are performed.

Quality
Basic raw materials are leaves picked during the first flush (the turn of April and May) − it is the freshest and best quality tea. There is a difference between luxury matcha, which is consumed purely as a delicious drink made of nothing else but matcha and water, and regular powder teas, which are used primarily as additives to foods and drinks.

There are three things that make the difference between regular powdered teas and matcha:
1. Taste
Matcha is sweet and delicious, with only a hint of astringency. The sweetness is caused by the natural L-theanine amino acids and vegetal fibre. For instance, regular powdered green tea usually lacks active amino acids, which leads to a rather insipid, rougher taste.

2. Colour:
Matcha is emerald green while powdered green tea is often yellow-green. This is because matcha is ground on slowly turning granite quernstones. There is minimum friction, the tea leaves are not overheated and keep their chlorophyll. On the other hand, common powdered green tea is often ground to powder by means of air pressure. The friction caused by this process “cooks” the leaves, rendering them yellow-green.

3. Nutrients:
Thanks to a high concentration of L-theanine amino acids matcha gives its drinkers a gentle “kick” that lasts from 3 to 6 hours. Powdered green teas contain much fewer amino acids and they do not have the same qualities.

Unlike the leaves of common green teas, which are thrown away after steeping, the pulverised leaves of matcha are whipped with water and consumed. Matcha is the source of high concentrations of various green-tea antioxidants, vitamins, minerals, fibre, caffeine and L-theanine, unique natural amino acids found almost solely in green tea.
It is assumed that these substances help keep mental freshness and energy.

The leaves of green tea are not fermented, which is why it contains much more antioxidants (compared to oxidised teas). They contain a significant amount of polyphenols such as epicatechin, epicatechin gallate, epigallocatechin and catechin. The content of polyphenols varies depending on the tea type. Thanks to these substances tea has positive effects – it helps prevent cancer, cardiovascular diseases, infections, caries and many other health problems.
Around 400 substances contained in tea leaves, so-called active ingredients, are known. They include particularly caffeine, polyphenols (tannins), flavonols, flavonoids, theophylline and theobromine (similar to caffeine), fats, waxes, saponins, essential oils, carotene, the C, B1, B2, B5, B10, B12, E and K vitamins, enzymes, iron compounds, potassium, fluorine, sodium, calcium, copper, nickel, zinc, trace elements and many more.
Tannins have an anti-inflammatory effect, help soothe the stomach and intestines and heal airway mucosa during cold. Theophylline stimulates blood circulation and relaxes muscle spasms. Tooth decay is prevented by the fluorine present in tea.
Polyphenols (tannins) are present in all genuine teas and cause their slightly bitter, astringent taste and distinct scent. After ingestion, they are absorbed into organs. They are excellent antioxidants.

Antioxidants in the matcha green tea

The teas grounded by granite stones contain the highest concentrations of antioxidants compared with all known fruits and vegetables.
The test of the capacity for the elimination of free radicals (ORAC) is a scientifically managed set of experiments designed by the Ministry of Agriculture of the USA (USDA) and Tuft’s University to assess the antioxidant effects of food and drinks. The result of the ORAC tests helps standardise, quantify and objectively compare the anti-oxidant qualities of foodstuffs.
The results of the last ORAC tests have shown that a gram of the traditional matcha contains 1284 ORAC units. Traditional matcha outstands all fruits and vegetables rich in antioxidants and superfoods.

We have been inspired by the traditional tea ceremony, taking the most important and practical elements – matcha, tea bowl (chawan) and bamboo whip (chasen). Everything else can be substituted.

How to do that:
In a bowl, whip two to three full spoons of tea with hot water cooled to 75 °C with a bamboo whip into nephrite-green foam. The thin foam gets denser after a moment as the leaf bits swell. Matcha tea contains all the active ingredients and the full aromatic body of the tea leaf. Only the best quality matcha is used for this way of preparation.
Tip: Open bag of matcha should be closed and placed into a can or plastic container and stored in the fridge. The freshness and aroma of tea will be preserved longer.

The classical tea ceremony is a complicated ritual deeply connected with Japanese culture. It is not just about drinking tea. It is a complex aesthetic and social experience part of which is a tea room with artworks, which can be admired by the visitors, while the preparation and drinking of matcha and tea ware are pieces of art themselves.

The times are fast, however, we don’t need to be deprived of quality. In fact, the preparation of even the highest quality tea is rather fast. You don’t have to whip matcha in a chawan, if it doesn’t appeal to you. A bowl or glass and any kind of electric milk frother will do.

Instructions
1. Scoop a teaspoon of powdered tea into a glass and pour over with 1 dl water which boiled and was left to cool to approximately 75 °C and whisk with an electric foamer.

2. Cold matcha can be easily prepared by pouring a teaspoon of matcha into a shaker, adding 3–4 ice cubes and 1 dl of water and shaking well. You will get a deliciously refreshing drink without sugar, full of vitamins, antioxidants and caffeine.

Category
Our specialties
Sorry, this item is now reserved by someone else. If he/ she changes his/ her mind, the product will be avilable again.