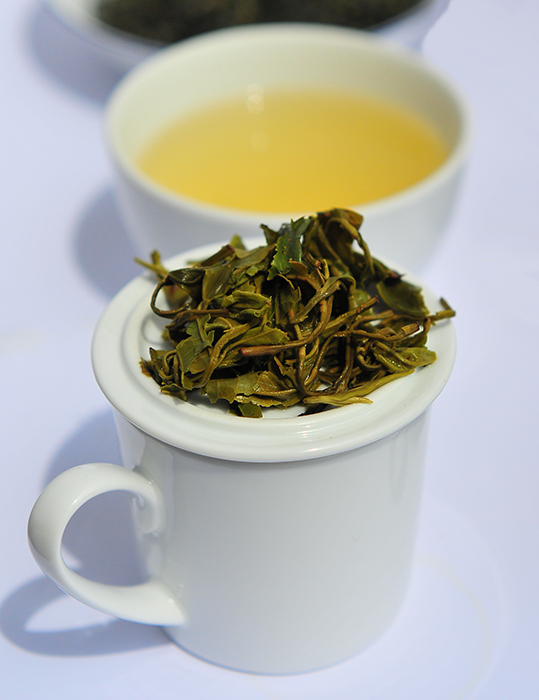 The original Darjeeling tea called also „Champagne of the teas“ is grown in heights from 600 to 2150 meters, mostly on the Chinese type of tea trees, which turned out to do great in the local conditions. Tea in Darjeeling is harvested in three terms, so-called First Flush (spring), Second Flush (summer), and Autumnal Flush. In winter the tea bushes rest.

Today, tea is grown on an area of 19,000 hectares in 83 gardens, with 10 to 11 million tonnes of genuine Darjeeling produced.
The original Darjeeling tea is grown in heights from 600 to 2150 meters, mostly on the Chinese type of tea trees, which turned out to do great in the local conditions. The proportion of the Assam variant varies across plantations, with the average from 20 to 60 percent. More and more frequent is the grafting of tea, the result of which are new clones and hybrids. Such tea is then denoted “cl” or “clonal”.
Depending on the proportion of different types of tea trees, Darjeeling is divided into four classes:

Class 1
Original shrubs planted around 1840 − the most sought-after and appreciated teas.

Class 3
Hybrids of the Assam tea tree with a Class-2 hybrid.

Class 4
Their origin must be traceable to Class 2, but the shrubs are not grown directly in the Indian part of Darjeeling. They come from the Doars area (a lowland at the Himalayan foothills around the town of Siliguri near Darjeeling) or from the Sikkim, Nepal, and Bhutanese borderland.

The designation of whole-leaf teas was taken from Darjeeling by other tea producers. These abbreviations, such as SFTGFOP 1 (Special Fine Tippy Golden Orange Pekoe 1) denote the proportion of tips − closed leaf buds − in the tea.

Flush takes place from March to November and is divided into the following seasons:

Spring – first flush (FF) – depending on the weather, it takes place from the end of February to the end of April. Teas harvested at this time of year are very popular. They are usually the first fresh teas after winter and they are the product thanks to which Darjeeling made its name. They are typical for their fresh flowery or fruity scent, sweet, slightly astringent taste, and strongly refreshing effects. The infusion is very light, golden or golden green in the cup.
The teas from this flush go to the European, American, and Japanese markets, usually by air and very shortly after the harvest.

Summer − second flush (SF) − is harvested from the end of April through May till the beginning of the monsoon. They are not as famed in the tea market as the first flushes, but their prices are often higher. The taste of summer-flush teas is more mature, fuller, and more aromatic. Fruit, nut, and sweet spicy tastes prevail, exceptionally there is the famed muscatel aroma, which cannot be found anywhere else in the world. The infusion is golden orange.

Monsoon flush takes place from July to September and its quality is not outstanding. These are stronger, rougher teas used for tea blends.

Autumnal flush is harvested from the beginning of October to the end of November. These are full, darker teas with distinctive fruit or nut aroma in clear, copper-like infusion. Genuine autumnal teas constitute a mere 5 to 10 percent of the yearly production, which is why they are rather expensive.

Region
Harvest
Our specialties
Sorry, this item is now reserved by someone else. If he/ she changes his/ her mind, the product will be avilable again.