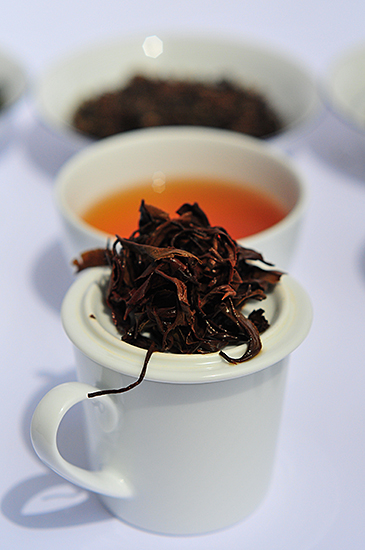 Black tea, called red in Asia according to the color of the infusion, means basically fully oxidized tea leaves. Not fermented, those would be Puerh teas. We sell black tea from almost all areas of its production. We started with teas from Darjeeling, Nepal, Indian Assam, and also Ceylon (Sri Lanka). Later we added black (red) teas from Taiwan and Japan. It was initially believed that black and green teas come from two different types of Chinese tea shrub. At least this is what the Swedish botanist Carl Linneaus published. However, both types come from a single plant, Camelia sinensis.

How did it all begin...
The drinking of black tea in Europe became widespread, especially thanks to the popularity of the drink in Great Britain. The Brits got to know tea as a result of colonialism and tea drinking made its way to the rest of the world.
The specific taste of black tea is shaped by the way of its processing and oxidation. Freshly picked tea leaves are left to wither to soften up. During withering, water evaporates from them. Then they are rolled, which disrupts the cellular structure, helps release the juices enables proper fermentation. This is the core process for the production of quality black tea. When performed correctly, tea has good taste, flavour and clear infusion.
Another important part of the process is drying with hot air, which also fundamentally affects the final taste and fragrance. Overheated tea may acquire an undesirable caramel flavour.
The fine caramel scent in black teas is the result of the caramelisation of sugars during the fermentation process. However, if it is too strong or resembles the smell of roasted bread, it is an indicator of poor tea processing.
Quality tea is the work of an experienced manager who controls the whole process and whose wrong decision can ruin even the best leaves.
There are whole-leaf and broken-leaf teas. This division takes place during sorting and breaking. Sometimes, the CTC technology (crushing–tearing–curling) technology is used for the processing of large quantities of leaves that are crushed and torn at the same time during curling. There are also powder teas (fanning, dust).

Black tea and human health
Around 400 substances contained in tea leaves, so-called active ingredients, have been recognised. They include particularly caffeine, polyphenols (tannins), flavonols, flavonoids, theophylline and theobromine (similar to caffeine), fats, waxes, saponins, essential oils, carotene, the C, B1, B2, B5, B10, B12, E and K vitamins, enzymes, iron compounds, potassium, fluorine, sodium, calcium, copper, nickel, zinc, trace elements and many more.
Black teas are fermented; this process destroys most of the vitamins contained in tea leaves. However, useful minerals and tannins remain.
The content of polyphenols varies depending on the tea type. Thanks to these substances tea has a positive effect − it helps prevent cancer, cardiovascular diseases, infections, caries and many other health problems.
Polyphenols (tannins) are present in all genuine teas and cause their slightly bitter, astringent taste and distinct scent. After ingestion, they are absorbed in organs. They are excellent antioxidants.
Tannins have an anti-inflammatory effect, help soothe the stomach and intestines and heal airway mucosa during cold. Theophylline stimulates blood circulation and relaxes muscle spasms. Tooth decay is prevented by the fluorine present in tea.

Assam
One of the most famous black tea producers in the world. In the northeast of India, in the lowlands around the River Brahmaputra, more than half of the total production of Indian tea is grown at a maximum elevation of around 120 m a.s.l. Most of it is drunk in India in the form of strong, very sweet tea with milk. Together with the provinces in south China, Assam is the only place of origin of wild tea. The local variety, Camelia Sinensis var Assamica, was discovered by Robert Bruce in the 1920s. He also began experimental tea cultivation. In the 1930s, its commercial cultivation commenced.
Thanks to uniform climatic conditions and soil quality, most Assam teas are easy to recognise thanks to their full, fresh flavour with a strong, sweet, almost honey aroma. The colour of the infusion is darker than in Darjeeling and Ceylon black teas.
Apart from tea processed by orthodox methods, the area offers broken teas and CTC (finely granulated torn leaves). A large proportion of Assamese tea goes into blends (English Breakfast is the most popular).

Darjeeling
Real gems among black teas are those grown at the foothills of the Himalayas near the border with Nepal and Sikkim. Here, in the vicinity of the former colonial town of Darjeeling, at an altitude of about 2000 m, a highly acclaimed tea is grown on a rather small area of 83 plantations. They were founded in the 19th century and have been planted mostly with Chinese tea plants with varying proportions of the Assamese variety. In the demanding terrain, tea has always been hand-picked and processed in century-old but well-maintained machines that remember the British Empire. This small area produces only a few thousand tonnes of tea per year; however, it is royal-quality tea.

Nilgiri
Indian tea from the “Blue Mountains” in south India at the borders of the states of Tamil Nadu and Kerala. Tea is grown on slopes of 600 to 2750 metres. About 70% of production is processed by means of CTC technology; the remainder is whole-leaf teas. The Nilgiri teas have sought to secure a position next to the teas from Darjeeling and Ceylon. The quality has been continuously increasing and it can be expected that Nilgiri is going to offer real gems in the future. The majority of the local tea is sold at the auction at the Coonoor Tea Trade Association and is used for tea blends and bagged tea. It is harvested in two flushes: spring, from January to April, and the monsoon summer flush in July and August.

Sikkim
Sikkim is a stone’s throw from Darjeeling, which is further south, divided by the valley of the River Teesta, with its tea plantations literally in view. The Sikkim teas are often sold under the Tevi Tea brand. This is where the only local tiny tea factory and the largest tea garden of about 437 acres are. The production of other small growers associated with The Sang Martam Small Tea association, who farm on around 75 acres, is almost negligible and is processed in the Tevi Tea Factory. Tea is harvested in three flushes identical to those of Darjeeling. The character of the teas is also very similar to those produced by Sikkim’s southern neighbour and until recently it could have been compared only to the average production of Darjeeling teas. However, the situation has changed rapidly and Sikkim teas have been improving their position in the market.

Nepal
In the same area, west of Darjeeling, there is another popular tea-growing region with climatic and geographical conditions suitable for the cultivation of Nepalese teas. Most plantations are in the eastern part of Nepal near the border with India in altitudes from 900 to 2100 m.
The first tea seedlings were a gift to the Nepalese Prime Minister Jung Bahadur Rana from the Chinese Emperor. The year 1863 saw the foundation of the first gardens in Ilam, an activity heavily supported by the governor of eastern Nepal, Gajaraj Singh Thapa. Ilam is a tea-growing centre till the present day. Currently, Nepalese tea is grown on 16,000 hectares in more than 85 gardens. The yearly yield is around 13,000 tonnes of predominantly black tea (80% of which is CTC). Nepalese tea has been experiencing a renaissance recently, with better and better teas whose quality is becoming close to those from Darjeeling. Unorthodox processing methods have been experimented with, which makes the local oolongs and green teas a real surprise.
There are three main flushes, identical to those in Darjeeling.

Ceylon
Originally, mainly coffee and sometimes cocoa was grown in Ceylon. Unfortunately, these plantations were destroyed by a disaster in the form of the Hemileia vastatrix rust in the mid-nineteenth century. The afflicted growers quickly found a replacement in the form of tea. The environment and climate were very favourable for tea growing and tea became widespread, soon replacing coffee completely within a few years.
Ceylon is the fourth largest producer of tea in the world. Tea is grown on 187,000 hectares, predominantly in the central and southern parts of the island. Three cultivation zones are recognised, depending on altitude:
high grown – above 1200 m
medium grown – central levels, from 600 to 1200 m
low grown – from the sea level to 600 m
Most local yield is processed into broken tea (BOP), fannings and CTC and is used in tea blends and bagged teas. Whole-leaf tea constitutes only a tiny part, not to mention green and semi-green teas.
Typical Ceylon tea has a full, spicy, honey-sweet − or fresh, even astringent − taste with a sweet fruity aroma and golden orange infusion.

China
Local black teas, sometimes referred to as “red”, are not particularly popular in China and large quantities of them have been produced only in recent decades. They include immeasurable quantities of various types of tea, often of excellent quality. The most famous red teas come from the Chinese provinces of Yunnan, and Anhui and to a lesser extent in most of the usual areas.

Kenya
Kenya is one of the largest tea producers in the world. Most of the tea produced there is processed mechanically by means of CTC and ends up in tea bags. The majority of teas are of average quality, with a taste somewhere between those from Assam and Ceylon.

Among other areas worth mentioning are Georgia, Turkey, Java, Sumatra, Argentina and Brazil.

Region
Harvest
Sorry, this item is now reserved by someone else. If he/ she changes his/ her mind, the product will be avilable again.