Oolong from Taiwan
Slightly oxidised Taiwanese oolong of the cultivar Si Ji Chun (meaning literally Four Season Spring). The name refers to its unique quality: it can be harvested up to 6 times a year while still tasting as a spring flush. Four Season oolong has a fresh, vivid, flowery aroma. This is a surprisingly expressive tea, very aromatic, with distinct fresh spring notes that evokes muguet and jasmine. It is very refreshing and fun to drink. Some people say it is very much like Chinese Tie Guan Yin.
Origin: Ming Jian township, Nantou county
Elevation: 400–600 m
Cultivar: Si Ji Chun

Four season Oolong is named after the varietal from which it is made. This hearty tea bush was discovered by a tea farmer in his tea garden in the district of Muzha, near Taipei. It is said to be a kind of wild tea. The character of this tea is also wild and vigorous. The farmer had noticed that some of the tea trees in his garden where growing very fast when others didn't even have any tea leaf buds yet. So, he planted these bushes more systematically and found he could harvest them 7-8 times a year, even in the winter time when tea bushes are usually dormant. So, this hearty varietal was given the name “Four Season Oolong” to match the vivacious character of this tea plant which yields a large quantity of tea per year. Therefore more and more tea farmers have started growing this “Si Ji Chun” plant in the last 10 years.
Most of the four season oolong tea is grown in the Songboling area of Ming Jian township in Nantou, Taiwan. This area, at an elevation of between 400 to 600 m above sea level, has the largest concentration of tea growers on this island and produces the largest quantity of tea in Taiwan, many of them originating from organic farms. 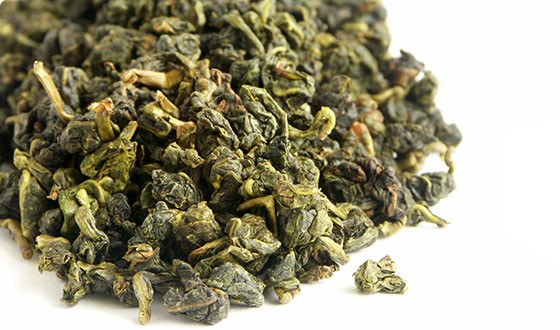