Dark Shu–puerh produced in early 90´s in Yunnan, South China and then stored on Taiwan in a form of 200g bricks. Beautiful example of succsessful archiving that gives special characteristic to the tea – fully matured archive tea with manifold flavor range and a very pleasant energy.
Thick ribust in a cup, dark turf-like colour that reminds of glacier lakes in Šumava mountains. Surprisingly velvet creamy rounded flavor with noble balsamic and mineral tones , with a hint of pine resin, oak bark and even sweet nut-like vibrating aftertaste.

Brewing recommendations: 4–5 g of tea per 100 ml of boiling water, steep for 20, 15, 10… seconds. This tea is ideally prepared in a miniature teapot, shiboridashi or zhong and cup(s) of the same volume so that the entire content could be strained at once.

Shu Puerh
The attempt to speed up the process of ripening of pu-erhs led to the discovery of the Wò Dūi method (渥堆, wet piling), which was first used in the early seventies in the famous plants Menghai and Kunming and that has spread throughout the whole region and become very popular. It is a controlled enhancing and extension of all microbial processes in the leaf. The Mao Cha tea leaves are made wet again, piled on top of each other and covered by waterproof sheets under which they ripen for 40 to 60 days. Then they are pressed, similarly as Sheng Puerhs, or dried and sold as loose-leaf tea. Although the original idea that led to the production of Shu Puerh was to replace the very long ripening process of the green variant, it basically led to the discovery of a brand new type of tea, which won its place in the tea market. After complete drying or pressing also Shu Puerhs ripen and gain quality with time. 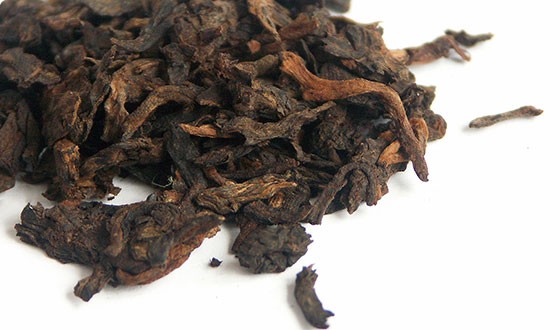